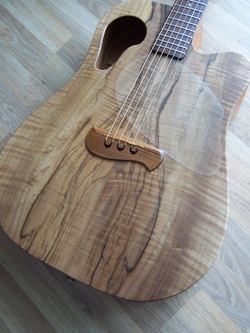 "I was very pleased with your work and I have now finished my strat project and would like you to set it up for me." - Richard, Strat project.

"Thanks Lewis, you always do a great job" - Steve, Classical guitar.

"It was recently set up by pro luthier Lewis Durtnall and plays as well as any Gibson equivalent!" - Sam, Epiphone Explorer

"Just wanted to say thanks for a job well done. I appreciate the attention to
detail."  - Robin, Epiphone Dot

"Thanks for the set-up dude, she's playing real sweet
now it's like a totally different guitar." - Andy, Fender acoustic

"You've certainly made a massive difference to my electric tenor guitar once you'd re-wired it - with a nice low action it's much easier to play and the
intonation is now spot on." - Rex, Tenor guitar

"Thanks, the guitar is GREAT! Thanks for all your work on the Tama, it's nice to finally have a guitar
I actually like playing!" - Lawrence, Tama Acoustic

"I am so impressed with the Tele you dropped off, many thanx" - Graham, Telecaster project

"The PRS .It sings, it squeals, it sparkles .I'm impressed and delighted. Better than new. Many thanks again!" - David, PRS SE Santana

"Picked it up last night and it looks absolutely fantastic... like brand new.. i was so amazed, u did an amazing job... thank you so much for everything" - Kirsty, Acoustic guitar

"Just played my strat, being honest its better now than it ever has been, thank you so much Lewis, a perfect job done well and a great guy to deal with" - Craig, Fender Stratocaster

"Just recommended you to my guitar teacher as I am very happy with the set-up" - Richard, Fender Squire Strat

"Hey, just did some playing, and looking what you done and just wanted to say thanks, you've done an amazing job!" - Lathaniel, Gibson Les Paul, Kramer Classic

"Massive thanks to Lewis Torbay Guitar Repairs for getting my guitar back to its former glory, its such a pleasure to play with the magic you've done " - Clint, Takamine Acoustic

"Thanks for the great set up on My Les Paul" - Paul, Epiphone Les Paul

"Fantastic job on both guitars thanks Lewis the 76 Strat is amazing now" - Kev, Fender Stratocaster


"Dude my strat is singing like its never sung before, many thx" - Chris, Fender Stratocaster

"WOW.....that makes a difference! I'm over the moon Lewis!
She sounds fabulous, I’ve now got to experiment with the different tones but am already in love with the thick heavy blues tones.....thank you so much!" - Chris, Vintage Les Paul

“Just to say thanks again for guitar it sounds amazing” - Steve, PRS SE

“Picked up 'baby Yam'....once again, very, very happy with the results you have achieved, couldn't be happier” - Chris, Travel Acoustic

“Just a quick note to said thank you so much for you skills and fixing my guitar I had great fun playing it until my fingers hurt. I would highly recommend you to anyone” - Richard, 1970's Fender Stratocaster

"An excellent and professional job carried out by Lewis in building my Stratocaster from my own sourced parts. Well worth the effort!" - Mike, Strat Project

"This guy is very good, professional, friendly fast and reliable. You got guitar issues give him a shout." - Chris, Takamine Acoustic

"Great thanks to Lewis for the most worthwhile guitar money I have even spent. My "unusual" blade (Levinson) has had a new lease of life. Beautiful set up, and vsc circuit now working perfectly. Also providing a mystery as to its provenance. Thanks Lewis" - Saul, Blade

"Lowest action I have ever witnessed!!! Lewis, a magic touch on the 80's schecter. Plays better than ever, especially now the neck has been corrected. Would not trust my guitars to anyone else" - Saul, 80s Schecter

"Lewis has just turned my les Paul into a incredible guitar with Jimmy Page wiring & a fantastic set up fitting the pickups I would highly recommend Lewis he’s the best Luthier I’ve come across and I’ve been playing 30 years"  - Rob, Les Paul Project

Below are a selection of reviews that we have kindly received on our Facebook page: ​​

For guitar repairs and customisations by Lewis Durtnall, email TorbayGuitarRepairs@live.co.uk!